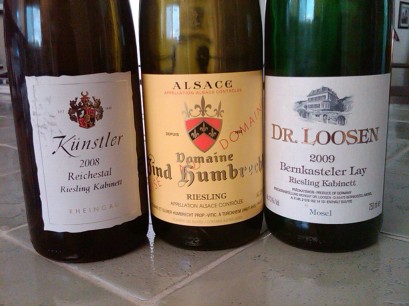 Question: I don’t recall if bubbles in Riesling are considered a flaw or not.  Also, are the bubbles produced as a result of fermentation in the bottle?

Answer: In Riesling, bubbles are not considered to be a flaw, although for most high-end Riesling ($30+) they will naturally be eliminated  by bottling later or using a permeable vessel (ie: Alsace).  If the wine is to be bottled young and bubbles are not desired, a producer can sparge the wine with a neutral gas to remove them.

In general, bubbles are not considered a flaw for white wine.  They are most commonly found in …

aromatic varietals that are bottled young.  Ideally bubbles in a white wine are either leftover from primary fermentation, or they are added at the time of bottling via CO2 injection.

Bubbles in some white wines (such as Chardonnay) are not a flaw, but considered atypical.  In regards to Chardonnay, this is most likely due to the fact that a good portion of high-end wine is aged for many months in barrel – during which time the fermentation bubbles naturally dissipate.   So while it is not a fault, it is also not typical for the varietal.

In contrast, bubbles are considered to be a flaw for red wines on the commercial market.  Perceptible bubbles in red wine is not a trait that a winemaker would purposefully keep (from primary fermentation) or add (inject with CO2) in a red wine.  However, I know a few winemakers who actually do inject their red wine with a tiny amount of CO2 at bottling.  This is done in very small amounts so the bubbles are imperceptible on the palate – it is done to give the wine “lift”.

Bubbles can be produced in white and red wine via undesirable means – and this is when it is a flaw.  They can be produced if a wine re-ferments in the bottle (sugar + yeast) or if the wine goes through MLF (malic acid + lactic acid bacteria) in the bottle.  In this case, in addition to the bubbles, you would have cloudiness or sediment, and sometimes a “dish-drain” type of aroma.